Ali yells to me “I cannot find my dog, Kisses?” I look around and try and figure out where he could be.

I asked Ali, “When did you see Kisses last?”

She said, “I went to bed with him last night and he was tucked under my arm.”

Will we ever find Kisses again? Who could have taken him? Why did they take him? Where will we find him?

I walked out of Ali’s room and noticed a paw print on the rug. I told Ali “There is a paw print.”

Ali said, “Let me check it out.” She said, “Zoie did it!” Zoie is a mini Australian Shepherd and she lives at my Mimi & Pa’s in-law apartment. I ran downstairs to Zoie and noticed she was still inside her crate.

My mimi said “Zoie has been down here the entire time. She has not been upstairs since two days ago.”

I ran back to Ali and told her, “It wasn’t Zoie that stole Kisses.”

Next I went to my Mom and asked her, “Did you put Kisses away when you were cleaning Ali’s room?’

I go back to Ali and tell her ,“It wasn’t Mom either!” I walk in the hall and notice the smell of dog treats. Who else could have been involved?

Ali came running to me and hugged me very tight. Ali says, “I wonder how she got under the bed?”

I said “Good question, we will have to do some more investigating.”

Ali went to sleep that night with Kisses tucked under her arm. When Ali was fast asleep Kisses peeked her head up out of the blankets and gave a little wink. The mystery was never solved but Kisses knows what happened. THE END! 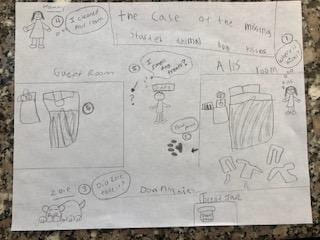 8 thoughts on “The Case of the Missing Stuffed Animal Dog, Kisses”